Today is President’s Day so the kids are home from school. Which I normally love, and I did for the first few hours this morning. But after one too many outcries of “we have no food!” and “I’m bored!” and a certain someone drinking the last of the Diet Pepsi even though he doesn’t even LIKE Diet Pepsi…I’m having one of those days. So between periods of dealing with the kids and doing my work, I’ve been reading through my old blog posts that I put up during my trip to Haiti last April.

A quick read through the handful of posts I was able to put up about my trip has me totally remembering. I planned on sharing all about my trip when I got home but it never happened. At first, it just hurt too much. I couldn’t look through the pictures and remember details of our time there without crying. Then somehow, although I swore it wouldn’t happen, real life crept back in. Our every day routine slipped right back into place for me and then it hurt to remember for completely different reasons. Reasons like how I was here in Oklahoma cleaning up my house or taking a child to one of their many activities when I knew that back in Haiti my sweet friends still didn’t have homes and being involved in activities like dance class and choir and sports were things they didn’t even know existed. So now here it is, nearly a year later and I still haven’t shared.

I’m ready now. With our next trip just 2 weeks away there are things I want to share. I hope you’ll come along with me as I remember last years trip while preparing for the next.

That first day, as we arrived in Haiti, it was just sort of overwhelming. I remember there was a whole lotta waiting. Waiting in the customs line at the airport. Waiting to find our supplies. Waiting for our ride to get there. Waiting to figure out how to load everything once our ride was there. Waiting in traffic. And then we finally made it to our “home”, which I described as the Taj Mahal in a message home to Brad. Our accommodations really were terrific. Except for the rooster that crowed every morning at 4am. Wish I was kidding. I coulda done without him.

Seriously though, the place was awesome. Not at all what I expected. The whole house was surrounded by a tall wall and I never felt like I wasn’t safe while I was there. Especially after I found out that there was a ginormous killer dog that was let out at night time. Thank goodness I never decided to take an evening stroll!

This was the girls bedroom. It was huge. Shelby and I somehow scored the bed and Jill, Cindy and Jen had air mattresses that were scattered around the room. It was very comfortable. Except for the rooster I mentioned. And the fact that it was super duper hot and muggy. I was always so exhausted by bedtime though that I had little trouble sleeping. 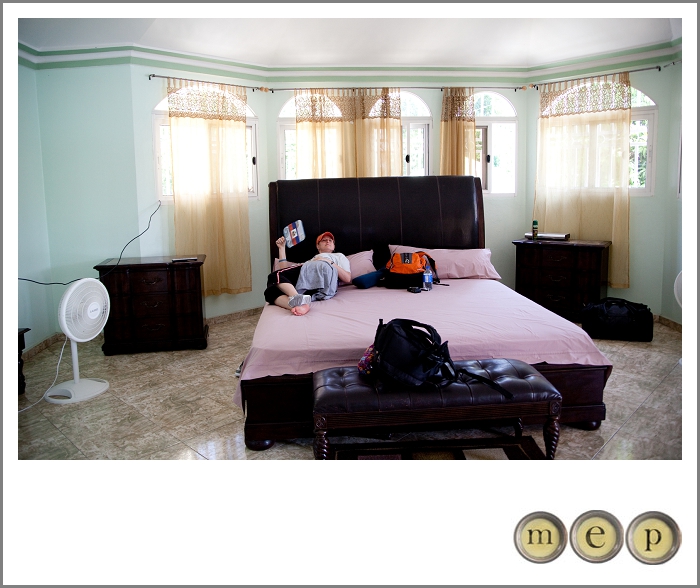 Our room again, shot with my fish eye lens. 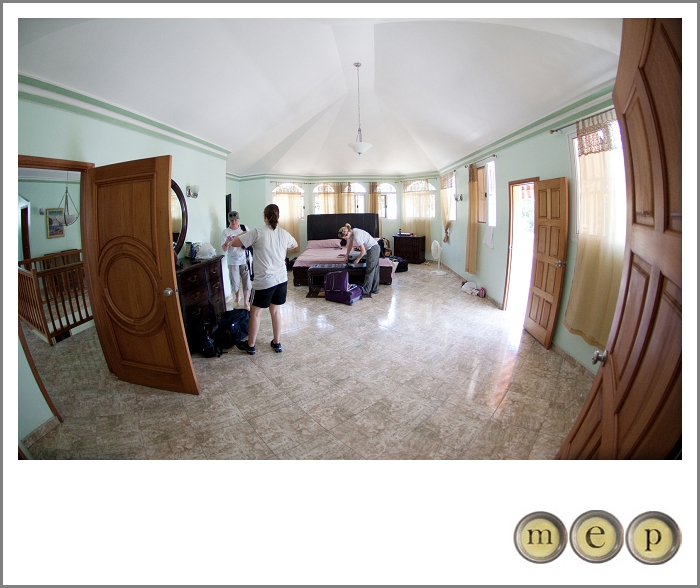 This was our bathroom. I couldn’t believe how huge this was! The cabinets stored lots and lots of supplies that had been sent and/or donated. 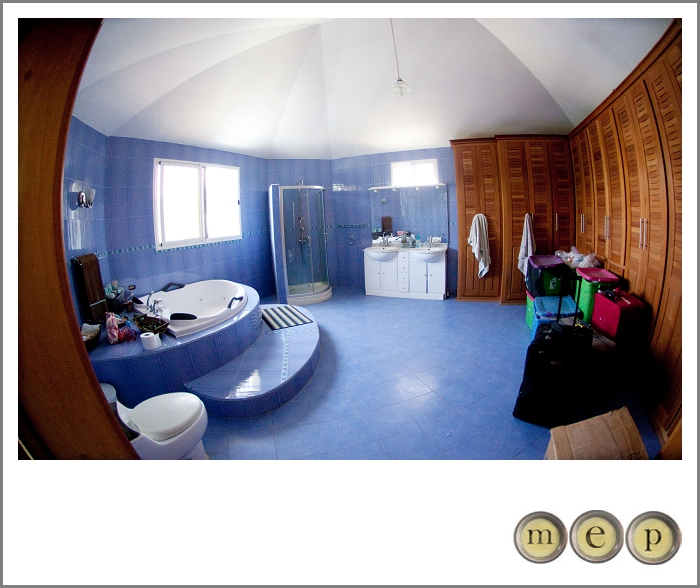 Our room had a little balcony that looked out to the surrounding neighborhood. We could also look down directly to the clothes on the line. I spent a lot of time searching and wondering where the one towel I had taken could be. I never did find that thing. Thank goodness for friends willing to share their towels!

Shown here with our laundry line is the front/side of the house and the back steps where we would gather in the morning when we were ready to leave.

This is a little sitting area at the top of the stairs that was right outside our room. I would go out on that balcony to talk with Brad when he called.

This is the front balcony. Several of the guys in our group would sleep out here to get a breeze because it was so hot in their room. That’s Wayne hanging out just taking it all in. He’s pretty cool, and will be traveling with us again next month.

From the balcony in the previous picture, this is the courtyard. You can see how tall the wall surrounding our home is. There was a little gazebo and several of the Haitian women that were cooking and cleaning for us stayed in the tents under the gazebo and in the courtyard.

The picture on the left is of a couple of the guys hanging out downstairs waiting to leave.  That’s my buddy Alan and Pypo and Doudy are with him.  One thing about our Haitian friends, they all go by nicknames.  I took this picture while Pypo (pronounced Pee-po) was trying to convince me that his name was pronounced Pie-po.  Alan already knew him and was telling me he was fibbing but he was still saying “I’m PIE-po” so I told him I would call him Mike.  And I did.  On the right is an image shot from the upstairs down through a big opening.  That’s Kendall and Garry G. standing by the front door.  And yes, it’s wide open.  When you don’t have AC you can do that.

The front porch, taken just before we were leaving to go celebrate the election of the new president. More on that to come.

Another view of the front courtyard. You can see the tap-tap (our vehicle) there on the left.

Another downstairs living area. The girls will LOVE that I’ve shared this one. We spent a lot of time in this area organizing supplies for the following day.

This is the driveway area leading under to the that back entrance I showed earlier. It’s actually the side entrance though. Anyway, this is where we’d hang waiting to leave in the morning.

And…our supplies would hang here too which made for nice spots to sit and hang in the evening. This is Shelby with the goat that I’m pretty sure became a meal for our medical trip that went in August. Shelby fed him licorice this night. He liked it.

And finally, this is the morning we left to go home. Sad times. We didn’t have the tap tap to ride to the airport but I didn’t know it. When this truck pulled in I joked about us all fitting in it. Little did I know we really would. All of us, plus some Haitian’s, plus our luggage. Good times.

And finally, here is a little video of our house. Sorry I’m sort of annoying. Brad had asked me to send him a video of the house so I did this one morning before we left for the orphanage. Then I tried and tried and tried to send it to him and I never could. But, you can get a little bit more of an idea of the downstairs of the house here. Especially the back as I didn’t have any pictures from that area. Also, the white guy in the tap tap at the end was a doctor from another country who joined the house the last two days we were there. He was in my seat. It was kind of a big deal.

When we go back next month we’ll be staying closer to Thomazeau so our daily commute won’t be quite as long. That’ll be nice!