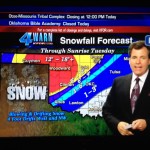 Ok, not really. I spent the weekend in Dallas at a dance competition with Sadie, where she earned a Gold for her solo and her group dance “So Cold” placed 2nd overall! At some point on Saturday my friend asked if I had heard about Monday’s weather. I hadn’t. That’s when I found out that Oklahoma was in for a “life threatening storm” with “blizzard like conditions”. Those are the terms the meteorologists used. That’s a big deal in these parts.

I LOVE the snow. Wait. Actually, I love being trapped inside when it snows. There’s something about being stuck at home with my family knowing that we can just relax and enjoy the time off. Of course, as a small business owner it rarely happens that I’m not doing some sort of work even on my days off, but still. I just love everyone being around!

Here’s the thing though. Stillwater is in like some weird bubble where we almost never get what we’re supposed to. It’s like Violet Incredible put some sort of force field around our town so that nothing could penetrate it. Drives. Me. Crazy. We are currently in for 3-6 inches of snow today by the looks of this map I got a screen shot of. (Yes, I take shots of the tv with my phone.) 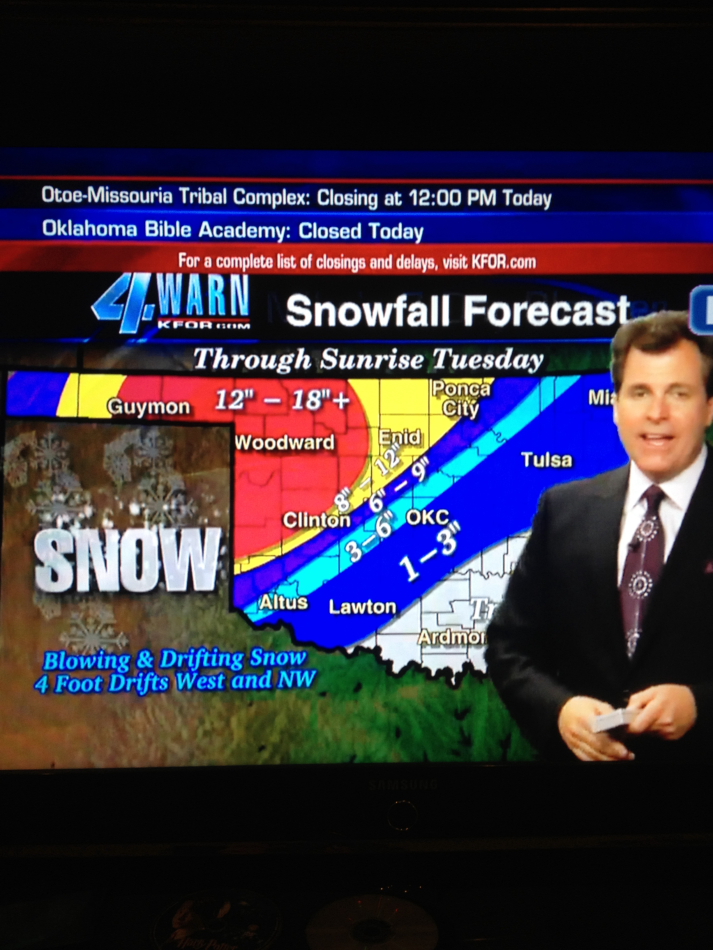 I’m doubtful that we will get anything. I went to Wal-Mart earlier today to grab some things and it was crazier in there than it is on Christmas Eve! (From the carts I saw today, I predict that in another week there will be a lot of Stillwater citizens complaining about the weight they’ve recently put on.) It’s now 3:30 in the afternoon and after a morning of non-stop rain it’s currently just gray and gloomy. OSU classes were cancelled at 12:30 today, church activities and school practices and dance rehearsal have all been called off for this evening; and so far there’s nothing.

Here’s hoping we get at least one snowflake!

Want to see how serious the meteorologists are treating this storm? (Which actually IS happening for our neighbors to the west! Stay safe friends!) Here ya go! Blizzard Conditions 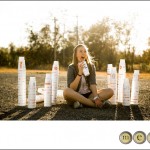 Happy Monday everyone! Hope you all had a restful weekend. I had a case of the blahs, especially yesterday when all I could think about was that today was Monday and I didn’t want it to be. I spent some time sort of inwardly reflecting this weekend about what my purpose is. (Wow. That makes me sound like a deep spiritual person. It actually hurts to think that hard. I much prefer just floating on through life!) So, I’m thinking and reflecting and just feeling like I’m not doing what I should be doing. I mean, sometimes I am. Have you ever just really felt led to do something and because of circumstances beyond your control you don’t. Like, you literally can’t. Yeah. Pretty much that. It’s hard to know what to do in that situation and that’s where I am.

Then there are times when you feel called to do something and you actually can do it but it’s scary as all get out. I was asked last week to speak to someone through a local center. The client just needed someone who was understanding and my friend that works there felt like I would be a good fit. She called and asked me if I might be interested and asked me to please pray about it. Last night, after running it by Brad, I texted my friend and told her I was in. I told her that although I was willing to do it, I was praying that the Holy Spirit would just speak through me because I didn’t feel the least bit equipped to be helping someone in this way. I’m a great listener. At least I think I am. I am just not the type to give great sound advice. I was worried about saying the wrong thing, about not being at all helpful, or just bursting into tears. I was worried about doing it “wrong”.

When my friend responded to my text she said, “God doesn’t call the equipped. He equips the called.” Wow. How awesome and amazing is that you guys?!

I met with this girl this morning. I’m pretty sure there were no profound words coming from my mouth. But it went wonderfully and I know that it’s because He truly does equip us to do His work. It’s not always easy and the results won’t always be what we feel they should be. But if we include Him in all we do it is SO much easier then when we don’t. Just sayin’. So from a blah weekend to a Monday starting off feeling like JC is hanging right here with me while I work…I’d say it’s gonna be a good week.

In other news, I AM finishing up all my editing this week. I was able to complete some projects that had deadlines and now I’m finishing up all the senior galleries that have been waiting to be finished during the busy holiday season. So if you’re waiting on those, know that they are coming this week. See how excited Liesl is about this information? Get excited like she is, it’s fun! 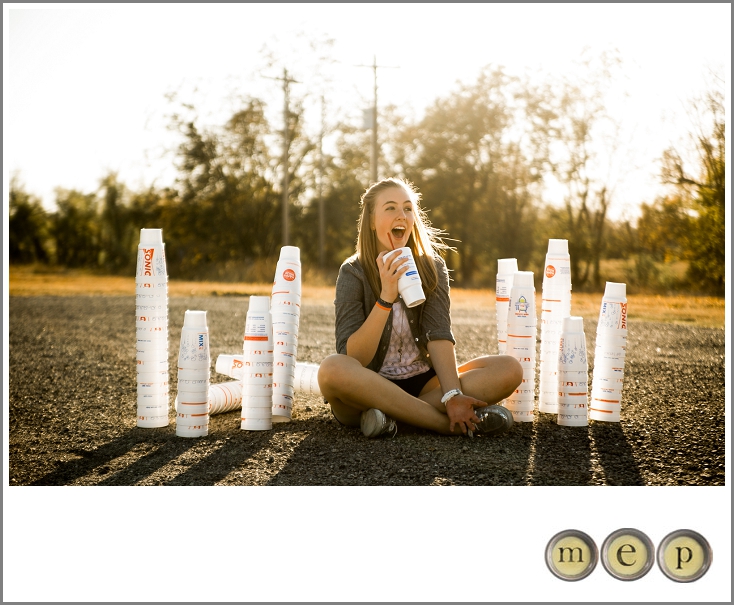 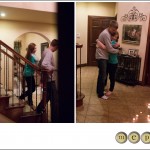 Whew.  What a weekend!  I had so hoped to get this post up earlier but today just flew by with all sorts of craziness and I’m finally, just now, finding myself with some quiet time to sit and think.  If you don’t like hearing about other people’s kids then now is the time to click away.  Otherwise, read on!

My Eli has been “dating” sweet Rachel for quite some time now.  I’m not sure why I felt the need to put the word dating in quotes.  Maybe because it makes it seem less real that I have kids old enough to date?

So as the semi-formal dance approached it was assumed that they would be going together but he hadn’t actually asked her yet.  These days, guys go to great lengths with pomp and circumstance in asking their dates to go to a dance with them.  Eli had a couple of Rachel’s friends come over and they were going to spell “semi” out in candles on the driveway.  But it was windy.  Like SUPER windy.  So I snuck them in and they put the candles on display in the entryway.  Eli had to bring the candles down from the bonus room where he and Rachel and my little girls were all watching tv together.  To get out of the room he told Rachel that he had to go see a dead cat.  What?  Who even says that?  Apparently Eli does, and Rachel said, “Um.  Ok.” 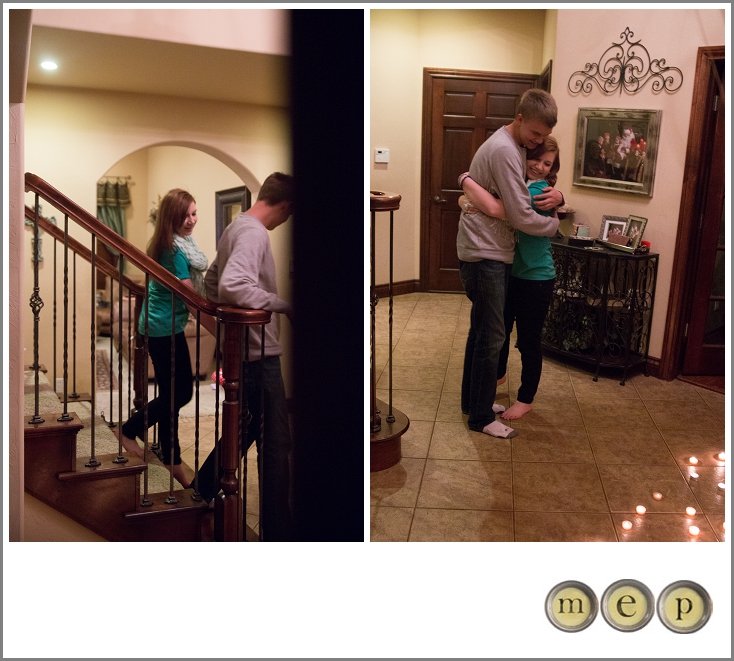 Excuse me while I dab my tears.  How do I have a kid not only old enough to date but who is such a sweet heart?!    So.  Very.  Verklempt. 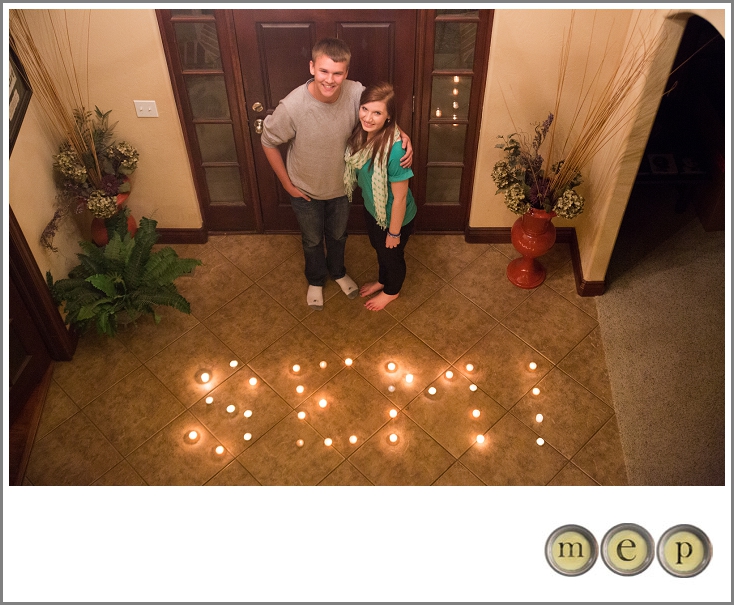 Saturday night was the big night and I wasn’t here.  Boohoo!  I had a good reason though, I’ll tell you why in a minute.  In the meantime, check out the super cute couples!  I set my camera up for Brad the day before I left because I had to have some documentation.  I feel certain that the girls had terrific looking shoes on, although I’m not sure because he cut their feet off.   What can you do. 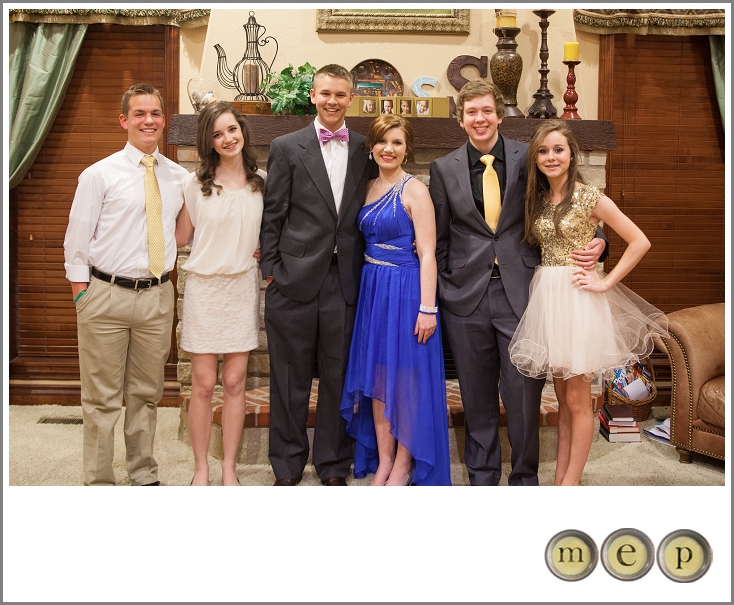 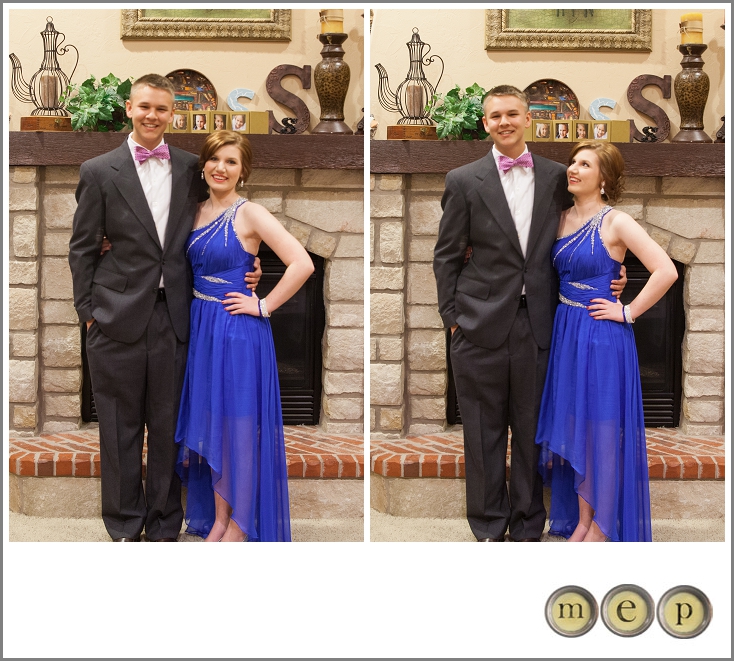 So while Brad was home taking pictures of the semi attendee’s, I was in Tulsa with the little girls because Sadie had her first solo competition.  She was SO nervous and Teagan was the sweetest little sister and so supportive and ready to help in any way possible.  I tweeted that morning that I wasn’t sure who was more nervous, Sadie or ME! 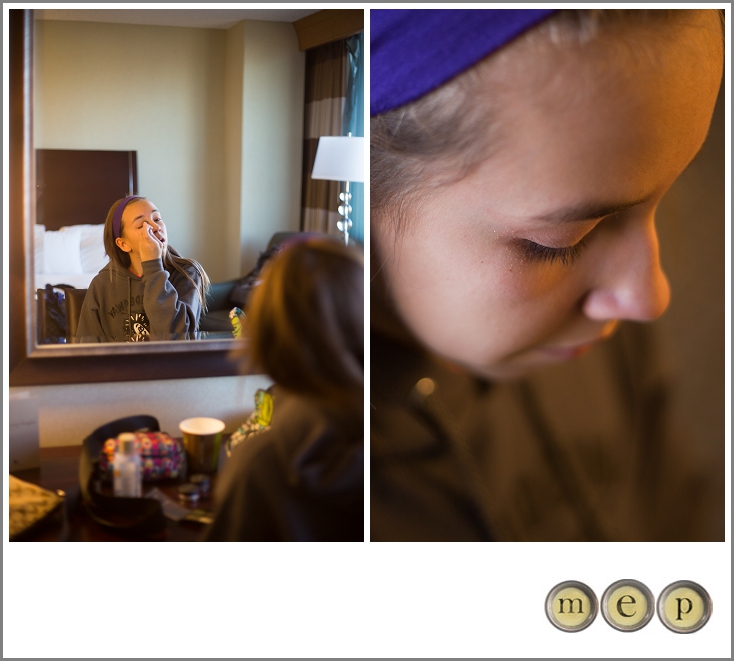 Let me just say, she did AMAZING.  Seriously.  Working up to this first solo attempt I kinda wondered if she would make it through.  (Is that bad?  It’s bad, isn’t it.  Shhhhh, don’t tell her I said that!) She struggled with stamina and some of the moves in the dance and her confidence.  But it was the BEST run she’d ever done and she ended up getting 2nd place in her category.  I am SO proud of her for getting out there and facing her fears and I just know it’s going to be better every single time she preforms! 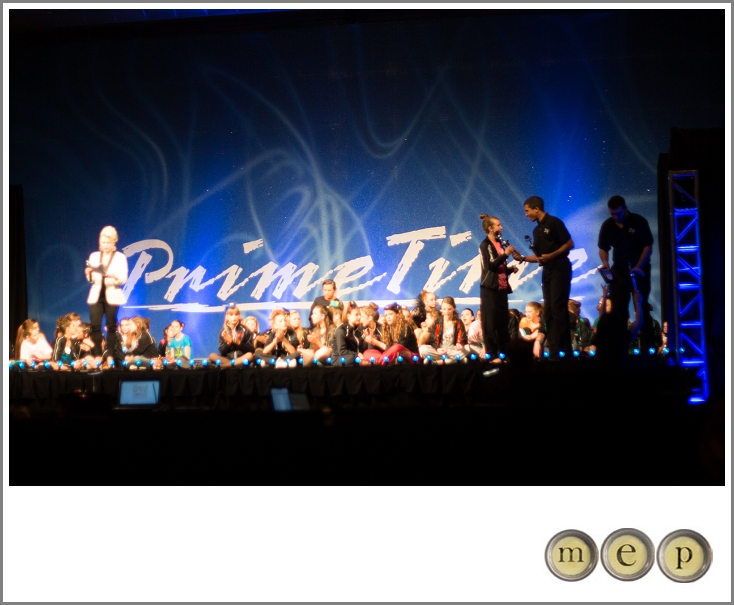 On Sunday she performed in her three group numbers and ALL THREE took 1st in their category.  Her dance, So Cold, even won for best choreography and was chosen to go on to finals.  And then, then…THEY WON!  This sweet group of girls who earlier in their busy day took the time to gather together with all their friends for a devotional since they were missing church TOOK FIRST PLACE!  Again, verklempt.  Talk amongst yourselves. 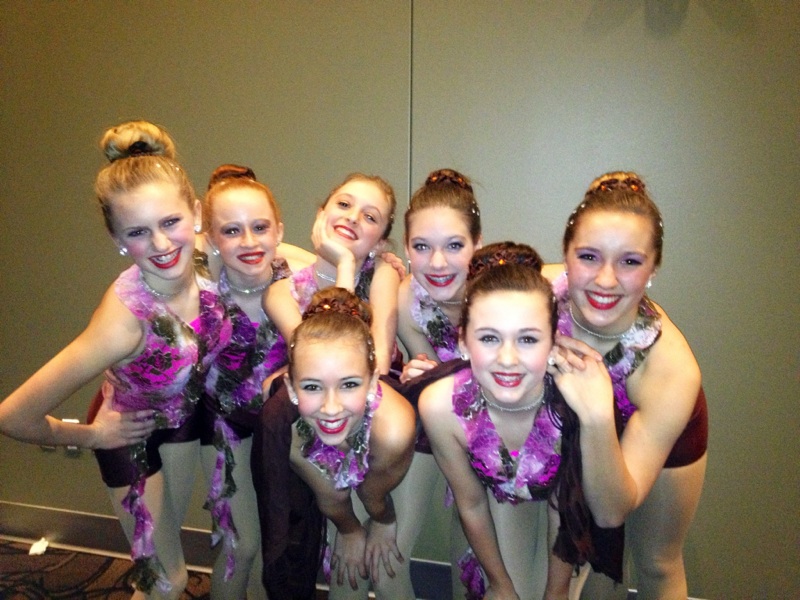 So that was my crazy busy weekend in a nutshell.  You might be wondering where Madi was during all of this.  Well let me tell you.  She was on a date with her new suitor.  (Please say “suitor” like they do in O Brother Where Art Thou.  It makes it much more fun.)  And our Monday started off another crazy busy week with Sadie getting braces (I just drugged her and sent her to sleep) and both Eli and Teagan eventually home from school.  It’s that time of year for the Stewarts.  Let the sickness roll!

Oh hey, one more thing.  The competition was being streamed live so Brad watched, and recorded Sadie’s solo on Saturday night.  Eli happened to be here to have pictures taken when it came on so you can hear Brad yelling to come watch.  Obviously, not the best quality but you can get a little peek at what her solo looks like.