As we begin the first part of our in-house remodel this week, I realized that I’m just accumulating all these photos that I want to share. I’ve done lots and lots of shares on Instagram and Facebook of projects along the way, but I haven’t done any blog posts dedicated to our “new” old house.

So for today’s Throwback Thursday, I’m going back to July/August of last year. We’d had our home for sale for a couple years and I was beginning to think that it would never sell. Then, right in the middle of one of the craziest times in our lives, we got an offer. The offer came in right as we were leaving town for a week (Youthquake or bust!), so as soon as we got home we had to hit the ground running to find a new house to call home.

There were only two houses that we’d ever looked at while our other home was for sale. One of them just happened to be having an open house so we stopped in for a peek. That one was just shortly after we decided to move and it quickly sold. Then, I found the house on Black Oak. I first saw it online and thought it had so much character. We also loved the neighborhood and the lot. We made an appointment to look at it in May and realized that the photos online didn’t quite show all the work that was going to need to be done to make it work for us. Not gonna lie, we were pretty bummed. But at the time, we still hadn’t sold our house so it didn’t really matter.

Fast forward to the end of July when we finally DID sell our house and needed to find something to move into FAST. I was pretty set that we didn’t pack up our big family and rent something for awhile because I just didn’t want to have to move twice. So the day after driving home from our trip to Colorado, Brad and I loaded up with our realtor and went to look at houses. I think we looked at 12 homes that first day. I also think that I’ve never been as stressed out as I was by the end of that day. We didn’t actually plan on looking at Black Oak again because we’d seen it before. At the end of the day, everything we looked at needed just as much work as Black Oak did so we ended up going back for another visit. Then, after going home and having some dinner, we started thinking that it might be the right fit for us after all. So we went back over AGAIN, with the kids this time, and took some pictures.  We also took lots of measurements so that Brad could draw up the floor plan and get a better estimate of what we might need to do remodel-wise.  (Not sure if I’ve mentioned it but my husband is pretty super cool.) 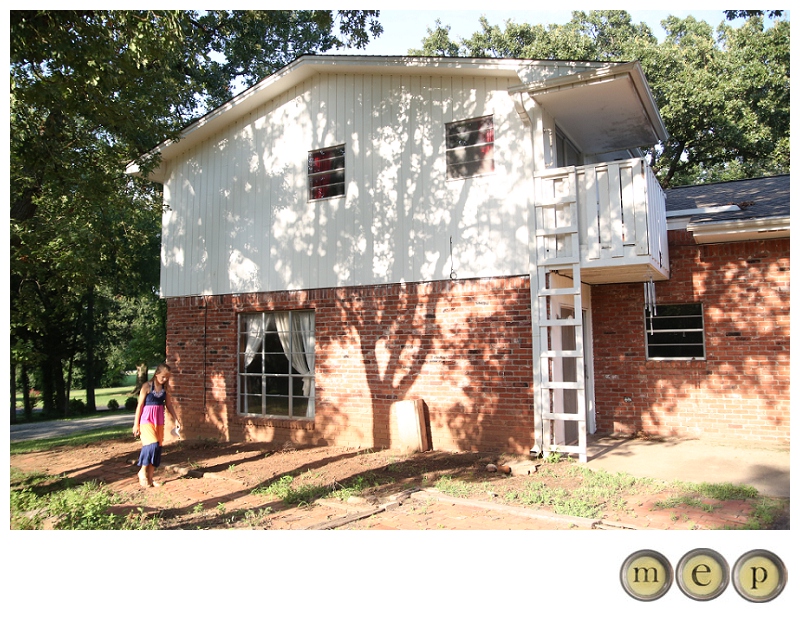 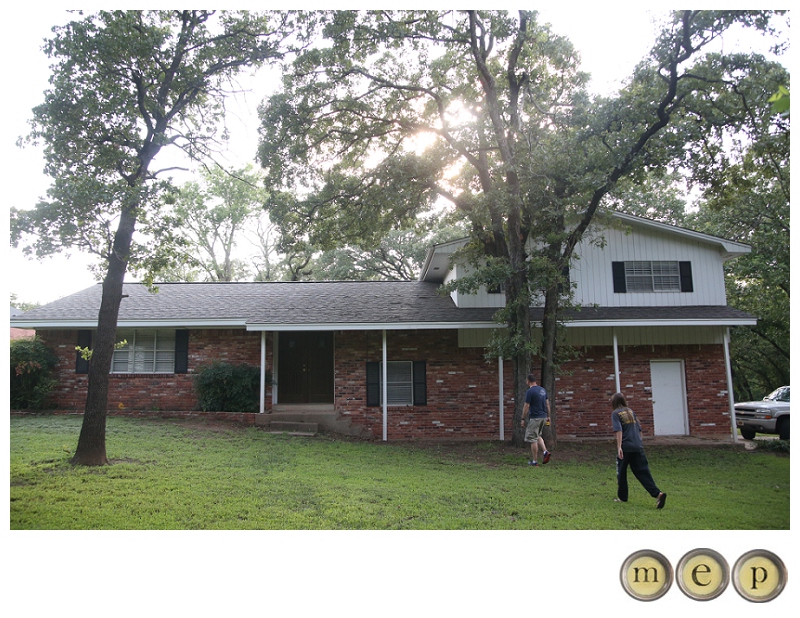 I’m standing in the kitchen area in this next shot.  The kitchen is on the main floor, along with the living room and main entrance.  Below is the den, a tiny half bath, a bedroom, a walk through laundry area and the garage.  Then upstairs is 3 bedrooms, 2 baths and a storage area that we get creative with.

This is the kitchen.  The shot on the left is taken with me standing in what should be the dining room and the one on the right is taken from the den (shown in the previous picture.)

So, a few days went by and we looked at a few more houses and finally decided that Black Oak was where we wanted to live.  Yay!  We weren’t going to be homeless!  By the end of that week, we were back inside.  We had less than a month to make any changes that we wanted to make before moving in, so we needed to figure out what changes were most important.  Some things had to be done because we couldn’t live there otherwise.  Like, the fact that the living, dining and den had no flooring other than the slab.  Other things, like removing popcorn ceiling and texturing walls, just made sense to take care of before we moved in.

This is the storage space I mentioned earlier.  It’s under the eave of the home so it doesn’t have a full height ceiling.  It also doesn’t have a window.  Or heat.  Or air.  BUT…it’s really fairly big.  Big enough for a bed actually.  So I told Madi, who was getting ready to head off to college at the time, that I thought it might work for a room for her since she would no longer have her own room when she came home.  Her response?  “This is my Harry Potter closet?”  Ok, so maybe.  Harry’s closet wasn’t as big as this but he could stand up in the entire space.  So, sure.  Ever since then, this space has always been referred to as the Harry Potter Closet.

This shows the ceiling in a better perspective.  As you can see, it starts sloping as SOON as you enter the room.  Eli, messing with some goodie he found in the attic, is almost 6’2″.  He can’t stand upright in the room.  (As of yesterday, this is actually his room since we have started remodeling his room downstairs.  It’s like a little man cave, er teenage boy cave, for him.)

On the left is Sadie, showing off the likely original-to-the-house Maytag oven.  It’s tiny.  Like, Playskool size.  On the right, is the entryway with disco light fixture and creepy girls in the background.

Finally, this is the main living room.  Slab floor, popcorn ceiling, lots of built in’s.  Around the corner there is the dining room, which I’m currently using as an office.

One of the things I originally loved about this house is the brick.  Both inside and outside.  Unfortunately, the patio here that is all brick has already been replaced with concrete because it was so wonky.  I love the new patio and have saved all that brick for a future project.  Yay!

So there ya go.  All the before-we-moved details.  Maybe next week I’ll throw it back to the month of non-stop work we did before we moved in.  In the meantime, if you need me, I’ll be knocking down walls and wondering how to do laundry for our big family when we don’t have our washer and dryer hooked up.