I’m throwing it back to 6 months ago this week. My little sister, Emily, was 12 weeks shy of her due date with my much anticipated nephew (who was still nameless).  Although Emily lives in Colorado and I’m in Oklahoma, we had been in constant contact over the last several weeks. In the previous 6 weeks, I had gone through a million changes. I had a cancer scare, sent my firstborn off to college in another state, sold what we built as our “dream home” and moved into a new (old) home, lost all of my work when my computer crashed, and turned 40 years old. It had been one huge thing right after another and Emily was always there to listen and lend advice. In return, I was there for her as her pregnancy didn’t seem to be running smoothly, and so she turned to me for advice since I was an “old pro”.

“I have a call into the nurse today because I woke up dizzy and have blurred vision.” She texted me one day.

“I’m so ready for the weekend! I’m already so swollen, I can’t imagine what I’ll be like when I’m closer to the end of the pregnancy!”

One day she called saying that she had been up in tears the entire night before because she was in so much pain. She tried everything she could to get comfortable and never could. She said she was terrified thinking that if she couldn’t just make it through her pregnancy then how on earth would she handle labor? Finally, in the early morning she threw up and figured that it was all just a bad virus that she’d succumbed to. But things were only better for a day or two and then she was back to feeling awful again.

The Saturday of OSU’s first game she texted me asking if she should be spotting at this point in her pregnancy. I told her not to freak out but that it wasn’t common and she should definitely put a call into the nurse. She felt so bad, saying she was sure they thought she was a big wimp because of the many times she had called in. In all this time, with all the calls she’d made, she hadn’t seen her doctor. She’d only heard from the nurse saying things like the doctor suggested she just take some tums, or put her feet up and rest.

On Wednesday, September 4th, I got a call from her and she was in tears. The night-time pain was increasingly worse. She said it was “excruciating” and she couldn’t take it anymore. She cried anytime she had to drive somewhere in the car because her upper abdomen hurt so bad when she sat up. She had just left work at noon and was headed to close on a house with her husband (they flip houses) and then was going to go to urgent care. I told her to keep me posted. A bit later, she called to say that she had called her Dr. to see if she could get in there and she couldn’t because she was doing surgeries that afternoon. The nurse said she was sure it was nothing, just indigestion, and that she could just visit urgent care.

Urgent care wouldn’t see her because she was so far along, so she went to the ER, where they sent her straight to labor and delivery. When I realized that I still hadn’t heard from her and it had been a couple hours I started to get worried. It wasn’t like her to not let me know what was going on. I texted her telling her I was worried since I hadn’t heard from her and she called me back within just a few minutes. I’ll never forget that phone call.

“I don’t have good news. I have severe pre-eclampsia. They are life-flighting me to Denver and taking the baby.”

With as much strength as I could muster I told her she would be ok. Actually, I think the first thing I did was ask exactly how many weeks she was. 28 weeks. Exactly. I told her the baby would be ok. I told her I would be praying for them both.

And then I had to hang up the phone.

Our Mom died when I was 19 and Emily was 17 and we’ve had a pretty special relationship ever since. We are so completely different from each other, yet we are each others best friends aside from our husbands. I was absolutely terrified when I hung up the phone with her that day. Being so far away and not knowing what was going on was one of the absolute worst feelings I’ve ever experienced. All I could do was pray, and I did. I reached out to everyone I knew and asked them to pray as well. Then finally, later that night I got a text from Emily’s husband Brian. Their sweet baby boy was born at 7:46pm weighing just 2 lb 1 oz and measuring 14″ long.

A couple days later, after Emily had finally had a chance to meet him face to face, they decided on the name Eliot Asher. And a day after that, I was able to join Emily in the hospital for a long weekend. It was then that I learned how serious the situation had been. Arriving at the hospital on her own, she had an ultrasound and was told by the doctor who preformed it (and lacked any semblance of bedside manner!) that if they didn’t deliver the baby that night then neither of them would make it. Her pre-eclampsia had gotten so severe that she had developed HELLP, where her liver and kidneys were basically shutting down. If you visit that link and look at the symptoms, it fits everything she had complained about. Believe me, I would like to give her original OB a piece of my mind!

Luckily, Emily and Eliot both had an incredible team of doctors and nurses in Denver. Emily was in the hospital for a full week, after having to undergo an additional surgery the day I had to go back home to Oklahoma. Eliot came home the day before Thanksgiving, on his due date. It was a long road with lots of tears while he remained in the hospital all that time. It was hard not being able to “fix” things like I would have liked for my baby sister. The only thing I could do was pray, and listen, and tell her that someday it would all just be a memory and he’d be home. And now…he is! He’s 6 months old and absolutely beautiful and I’m SO thankful that he and Emily are ok! 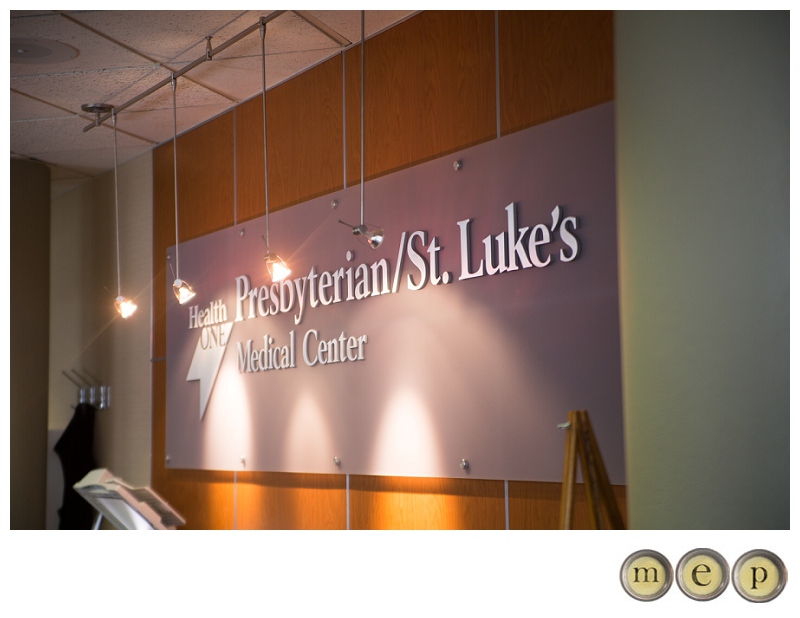 We happened to have two flights that were about to expire so I surprised Emily by bringing Madi with me.  That was the weekend Madi decided that she wanted to be a nurse after all! 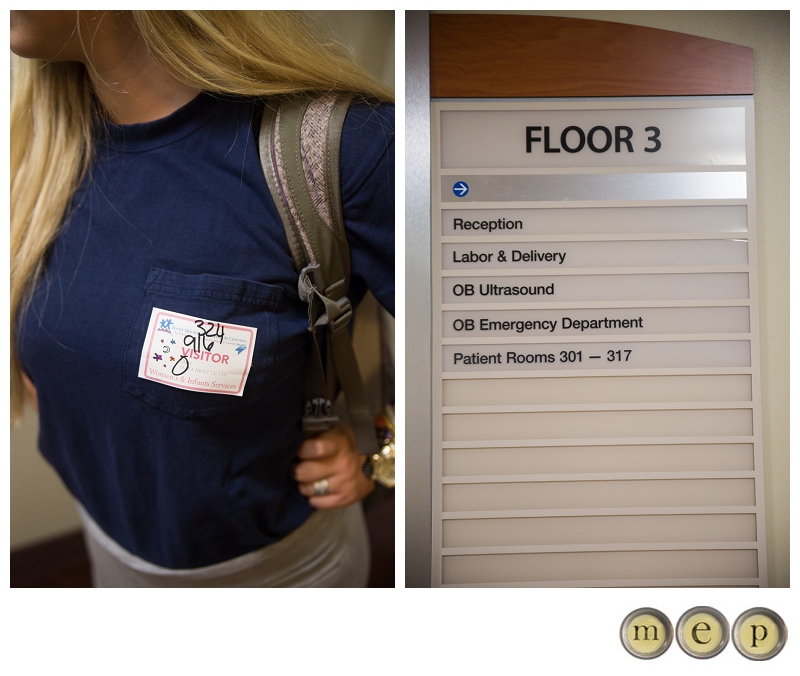 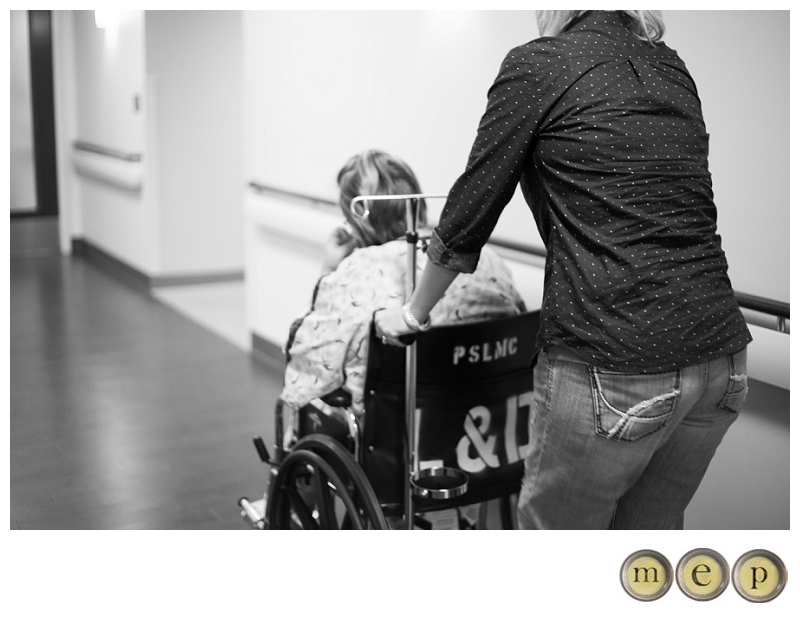 Brian had texted me pictures of little Eliot before I was able to get there.  So I knew what to expect but let me tell you.  He was TEENSY.  This is Emily holding one of his diapers and it was still too big and had to be turned down.  By the time I got there here weighed 1 lb 15 oz.  I’m telling you.  SO tiny!

This is Emily getting to take his temperature for the first time.  While her hands ARE puffy from her pre-eclampsia they are still tiny.  Seriously.  My sister has kid sized hands.  Knowing that really shows you just how tiny he is!

Recovering from a c-section, trying to get her blood pressure down, figuring out how to feed a newborn when you don’t really HAVE the newborn.  Emily was a champ!

The second day we were there Eliot was jaundiced and spent the day under the bili-lights.  The whole room was blue like a disco party.

I kinda feel like his sun goggles look like a little aviator hat.  Right?  This is Emily and her tiny hands again.

Emily may or may not have had a bit of a breakdown after moving into this room that was not very big.  Also, the bed wasn’t up to her standards.  Something about being on a roller coaster nonstop.  In fact, after taking some pain meds she told Madi she could take a ride on her roller coaster bed.  It was only funny then because the breakdown was over.  😉

Huge shout out to Brian for his unending care and concern!  He wanted to be with Eliot but hated not being with Emily.  I was so glad to be there for a couple of days so that he could focus on Eliot and learn about everything going on with him and his care.

I’m telling you, Madi and I left for the airport just as they were wheeling Emily out to surgery.  I wanted to stay so bad and it was really hard to leave her.  On the right is a tiny little hat I made.  Tiny.  First one I ever made and although his head was tiny, this hat was too small for him.  Oops.  It’s still cute!

Happy 1/2 birthday Eliot Asher!  I praise God that you and your Mommy are alive today!