I’ve always been sentimental. Nostalgic. A smell, a sound…it doesn’t take much to take me back into another place and time. I was just about 6 years old when I moved to Tulsa to live with my Mom and Step-Dad Johnnie. We lived in the house that Johnnie and my Step-Sister Amy lived in and I considered it my own home. I think my Mom never really thought of it as “hers” though. I can remember going to look at open houses on Sunday afternoons. My sister and I would always call dibs on whatever bedroom we thought should be ours. We’d dream up ways to arrange our furniture and think about how neat it would be to live in that “new” house. It wasn’t until the summer before my senior year of high school that we actually did move. I don’t remember feeling sad about it at the time. It was just a house after all. As time went by though I started missing that old house. 219. That was the house number and how we would refer to it after that. “Remember when we used to slide down the stairs at 219?”

Even after I was married and Brad and I started thinking about building our own home, it was that floor plan that I wanted to duplicate. Not because it was an awesome floor plan. I think it was more that it was what I thought of when I thought of “home”. Yes, it was just a house but it held so many memories. Maybe if I could build that house again the memories wouldn’t fade.

We are in the process of trying to sell our current home. Brad built this home and the memories just from that time period are too many to count. We love this home. But when it comes right down to it, it’s just a house. We realize now that we could downsize some and spend our money on things a little bit more important. Over the last year and a half I’ve just been praying that we would get an offer and we just never have. I found out yesterday that there is someone who might be interested. I don’t know it it will work out or not but I know that I got off the phone with my realtor and felt a little bit sick. All this time feeling like this is the path that God was leading us on and talking the talk about “it’s just a house” and all of the sudden I just felt like I couldn’t move. This is MY house. This is where my children have grown up. I can’t leave this place.

I don’t really like change. If things change then I only have memories left. I think that’s enough though. More memories will be made no matter what house we live in. And when it comes down to it, it’s really just this simple: 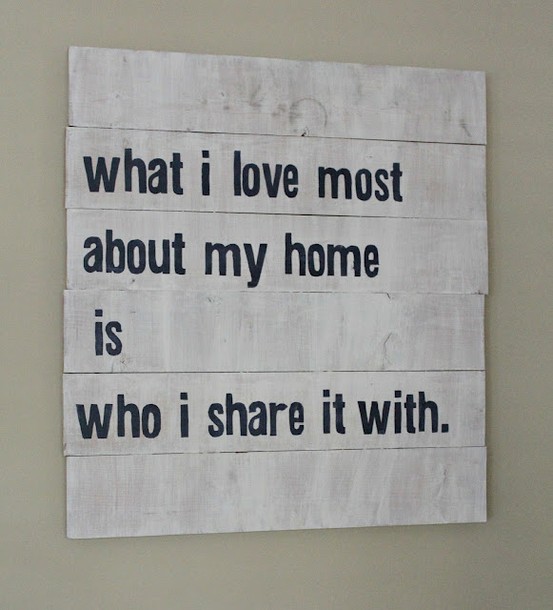 Whether we stay in this home forever or move next week, we will always have the memories that have been made here. Just as I have these memories forever with me from 219.

1. We had a basement in that house that terrified me. It’s where the laundry was, and the deep freeze, and the “pantry” was the side of the wall going down the basement stairs. If I ever had to get anything out of the pantry I would open the door and without stepping on the stairs I would lean out as far as I could to reach what I needed. If I couldn’t reach it I’d have my little sister get it. (She was my go-to girl when I was scared. I could get her to do anything.) There was a crawl space under the house and you could see it from the basement. I’m pretty sure Freddy Krueger lived under there. And the stairs didn’t have backs on them. So on the off chance that I had to actually go down there I would walk up the stairs and could see through to the crawl space. I probably should have been a runner back then. I was like Flash from the Incredibles going up those stairs.

2. There was a little bitty half bath downstairs and on the back wall there was a mirror. In each corner of the mirror was the screw that held it in place and there was a little clear plastic flower around the screw. One of the little flowers was broken and it would turn freely. I’m not sure how I discovered that. I just remember any time I was in that bathroom I would give that little flower a big push and see how many times I could get it to spin around.

3. We kept track of our growth on the door frame of the door going to the basement. I loved to sit and look at all the different marks on the wall and try to remember how it felt to be when I was shorter. Like growing a couple of inches made everything look differently. I’m pretty sure there was a little tick mark down at the bottom where I had held my guinea pig up on his hind legs to see how tall he was. If you were a member of the family, you were on the growth chart.

4. Our kitchen floor was black and white checkered. I loved it. I would hop through the kitchen from the dining room, on the way back to the family room, pretending that if I stepped on the white the hot lava would get me. Sometimes it was alligators. Whatever it was, I always stayed on the black ones. I’m not sure why, those were just always the safe ones.

5. In the dining room there was a big huge grate in the floor. I guess maybe it was the air vent. It was big. Really big. I’d never seen the grate cave in but I was certain if I walked on it that’s exactly what would happen. And you had to go over it to get through to the kitchen. Unless you went around the table the long way OR if you went through the living room. Either of those routes required extra steps though and as a chunky child I was not looking to take any more steps than I needed to. So I jumped. One quick jump over the grate and you were safe. Just in time to hop all the way through the kitchen on the black tiles.

6. When we moved in the number of people in the house went from 2 to 6. Johnnie built onto the back of the house our family room and back stairs that led up to their new master bedroom. At the landing at the top of the stairs was a closet and in that closet were pull-down stairs that led to the attic. Just up those stairs and then out a little side escape and you were safely on the roof of the new addition. Amy showed me how to get up there and that’s where I would go bake in the sun where no one could see me. I’d climb up there with a big Coke and a book and a towel and sometimes my walkman (I was cool.) and just fry. One time a friend told me she used Crisco as suntan lotion and I thought that sounded like an awesome idea. We only had butter flavored Crisco and I figured that wouldn’t be a problem. I don’t think I had it lathered on me for more than 5 minutes before a nearby bee’s nest found me. Apparently bee’s like butter as much as honey. Who knew.

7. One of my favorite things about 219 was the big huge magnolia tree in the front yard. I was never much of a tree climber but my brother would scale that thing up to the roof line of our house. I preferred hanging from the bottom branch which was much safer. What I really loved was using the fallen magnolia blooms to write secret messages on. You could write out a whole message and not see it right away. Not until the creases made by the messages turned the flower brown. Not long after we moved from 219, the new owners cut down that old magnolia tree.

8. We didn’t have a mail box at 219. Instead, we had a mail slot in the door. I thought that was the coolest thing ever. Every day, the mail man would come and open that slot and just drop the mail in on the floor. If you happened to be in the living room when it came in, it seemed like letters and flyers appearing from no where. My sister Amy and brother Matt were both able to open the front door without a key using the mail slot. They’d stick their long skinny arm in, reach over to the door knob, turn the lock and they were in. My little sister Emily and I had chunky arms so if we got locked out we had to just wait till someone let us in. One time Amy told her friends about how to get into the house. Then some jr high girl drama happened and one particular friend was mad at Amy so she snuck in our house while we were gone and poured shipping peanuts and maple syrup all over the kitchen floor. Not cool.

9. We weren’t allowed to have our own phone in our rooms. At the top of the stairs there was a rotary phone on the wall that had a super long cord. I spent hours on that phone. I’d pull the cord tight and go into my room and talk and pretend like it was my own phone. Or I’d sit at the top of the stairs blocking the way up or down with my body and the cord. It was like an obstacle course trying to get past someone on the phone up there.

10. Our neighborhood was pretty awesome. At any given time there would be a group of kids outside playing. Whether it was a game of baseball in the middle of the street with the older boys in the neighborhood, playing “house” pretending the little twins Charlie and Dave from across the street were our kids or getting bundled up to go out and build and igloo on a snow day there were always plenty of people to play with. We’d have block parties where the street would be blocked off and all the neighbors would come out and hang together. We had garage sales with the Kerns and Champions and Perrys. From my street, within just a couple of blocks there were just so many people to play with. Jennifer and her little sister Melanie, Benji, Jeb, the little twins, Emily, Nan, Jason, Amanda, my best friend Lisa who moved all the way across town when we were in elementary school… Man, I loved that neighborhood.

Here’s to memories we hold with us and new ones to be made. What are some of your favorite memories from the home you grew up in? Does your family still live there? Do you drive by every time you’re in town? Comment and share your memories with me!

« Ten On Tuesday Ten on Tuesday »

Lol- you could get her to do anything except for order pizza from the pizza place on the phone- too scary for Mo! lol. I remember that house well too. Spent many nights there 🙂

But I COULD get her to pay for the pizza if I would do the ordering. Sucker!