My sweet Teagan is sick. It started the end of January. The 30th to be exact. She complained that morning that her head hurt. I felt her head and I didn’t think she had a fever so I sent her to school. She complained after school and the next morning but I sent her to school again. By that afternoon when she got home I knew she was feeling really cruddy so I kept her home from choir. She stayed home the next 3 days and did nothing but lay in my bed complaining about her head.

Saturday evening we went to the Concert With A Conscience and within an hour of being there she was in tears because it hurt so bad. Sunday we went to church and in the lobby afterwards she was crying again. I took her to urgent care on Monday where they tested for flu (negative), strep (negative) and did a CBC. Her blood work showed that she probably had a virus. But she was the same all week. Low grade fever (99-99.5) and a headache, so I took her to her pediatrician on Friday. She did a mono test (negative) and a test to see if she had the same cold/crud that Eli and I had (negative). By Sunday the spunky Teagan was starting to come back and after Monday’s snow day she returned to school on Tuesday.

That was last week and she did pretty good most of the week but then on Saturday, after watching Sadie’s dance competition all day she ended up in tears at dinner because of the pain. In an effort to make it feel better she was holding her drink on her head and spilled it all over herself. Bless her heart. Sunday she was decent, but then Monday night it got so bad that I considered taking her to the emergency room. That’s the night that she had yet another break down because of the pain but for the first time she said that it was a “10”. Meaning, on a scale of 1-10 with 1 being just an itty bitty amount of pain and 10 being the absolute worst pain you could ever imagine. Through tears she whimpered to me, “Why does Jesus want my head to hurt?” I talked, we prayed and thankfully she fell asleep.

She made it through yesterday and this morning we went back to the doctor. More blood draws and a migraine pill were on today’s agenda. I’d heard, and the Dr. today confirmed, that if you take a migraine medication and your headache doesn’t go away then it wasn’t a migraine. Well, it didn’t help her. So migraine is out. The blood work they did has all come back normal so far. I’m just waiting for the Dr to call with results on the sed rate but I’m assuming that will be normal.

So, right now we are still trying to figure out what is causing this. We got a prescription of Lortab for her to take but she obviously can’t take it and function at school so that stinks. We’ll try it this evening and see how it works. Then she is scheduled for an MRI Friday afternoon. I’m just praying for some answers and relief for my sweet girl. She’s just pitiful.

In other news, I tossed and turned last night. As in: All. Night. Long. If you know me then you know I’m a sleeper. I can generally fall asleep within just a few minutes, and if you don’t bother me I can stay asleep as long as possible before I realize it’s nearly lunch time and I should probably get up. If you do bother me and wake me up, then I’m generally able to fall right back to sleep. So when I got in bed and tossed and turned trying to fall asleep it was odd. I prayed. I went over lists in my head. I prayed some more. And at some point I would fall asleep only to wake up again within an hour. Often when that happens I get to thinking that someone needs my prayers. So every time I woke up I would pray for the first person who popped into my head. My cousin Taylor who is 41 weeks pregnant. My friend Danyelle. My husband (who happened to be tossing and turning just as much as me!). All the orphans I know and the ones that I don’t.

By about 5:00 Brad was already up and awake because he obviously couldn’t sleep. Shortly after 5:30 I gave up myself when it was obvious there was no way I would be able to sleep anymore. I’m curious though. Do you ever think that you wake up for a reason on nights like those? I do. So when it happens I generally talk to God about whatever is immediately on my heart. Sometimes I’ll wake up and feel mad that I can’t get back to sleep and then suddenly just think “Oh! God wants to chat!” So I’m curious about today. I wonder if someday I’ll look back on 2/22/12 and know why last night was so restless for both Brad and me.

And now, ladies and gentlemen….for your Haiti lesson today I give you…the tap tap.

There are no seat belts, air conditioning or padded seats. After a week of riding one down insane Haitian roads it is quite possible to come away with a “tap tap tattoo”. That’s what I did. A metal bar at the same spot on my back bouncing around all week long left a pretty rad bruise. Wish I’d gotten a pic of that!

And now for a lesson in what you can do on, in and around the tap tap.

You can stand or even ride on top of a tap tap. 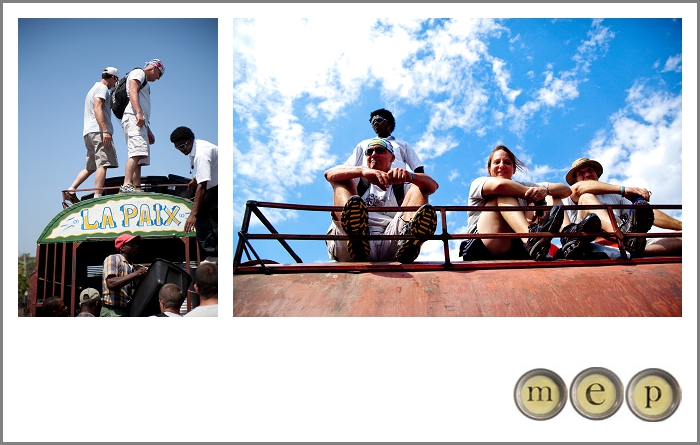 You can hang off the back of the tap tap. 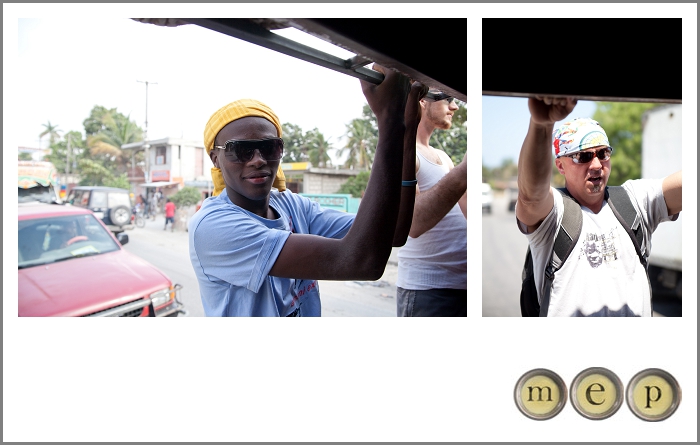 Giggle in the tap tap. 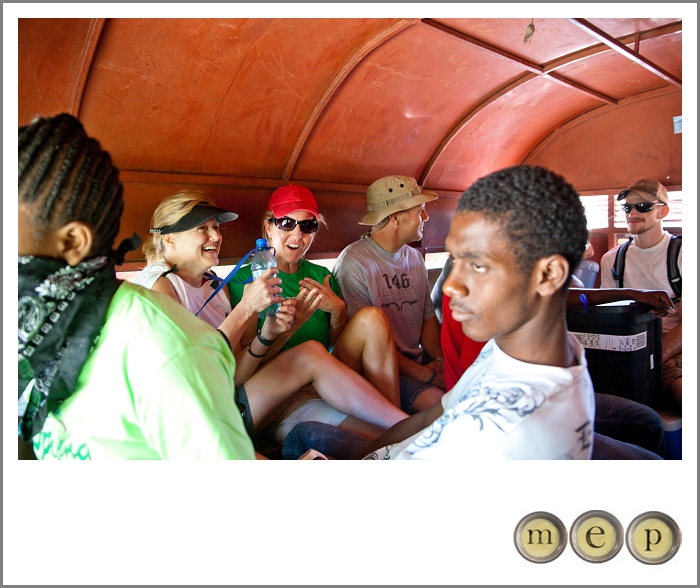 Take a nap on a tap tap (watch out for the dust!). Reach out and touch the car next to you from the tap tap.

Cram a bunch of people in the tap tap.

Use the tap tap for shade.

Take pictures of other tap taps.

Wait until you are driving away and throw goodies from the tap tap to those in need. (Sadly, all we had left at the time to throw to this sweet girl was a pencil.)

So see, lots of fun on the tap tap. On the bumpy road. In the crazy traffic.

And when you are beside yourself, because you are going home and don’t know when you’ll be able to come back again, you can have a party on the tap tap and find joy.

(We had left the orphanage at Thomazeau and traveled to another orphanage for a bit. This was on our way back to our house for our last night in Haiti. Towards the end of the video, when you hear us scream…we are passing our friends in Thomazeau one last time.)