It’s Friday the 13th which generally doesn’t really do much for me. I don’t buy into the superstition that is associated with the day. Today though, I’m feeling a little bit freaked out. Having lived in tornado alley for the better part of my life I’m pretty used to the meteorologist’s warnings and crazy weather that we experience. However, I can count on my fingers how many times my family has had to take actual shelter from the storms.

There were a handful of times as a child that I can remember heading down to the basement to ride out a potential storm. (I think our creepy basement and the fear that Freddy Krueger might be hiding in the crawl space near us was more terrifying than the thought of a tornado taking my home.)

Then there was the time when Madi and Eli were little when I actually saw my first tornado. Knowing the weather was going to be bad that evening, we drove through Taco Bell to grab dinner and then were stopping at a gas station to grab a few quick groceries when we realized the employee’s were locking the store and leaving. We asked if they were closed and I just remember them being all “Um, there’s a tornado.” We hopped in the truck to head home and as we approached the stop light just a block away, we looked to the west and there in the sky headed right down the street like a car was a tornado. I don’t know why, but we went home. I think we were just planning on hanging out in the bathroom. As we got out of the car all the hair on Brad’s arms stood straight up from the lightning and electricity in the air. He wasn’t as worried about the actual tornado as he was about the electricity surge that he felt. So we drove to his office where we knew we would be safe in the basement and rode the storm out there. I think one of the things I remember most about that night was that when we got to Brad’s office a car pulled in behind us that turned out to be two college girls that lived across the street from us. They got out of the car and followed us in saying, “We had no idea what to do or where to go but when we saw you leaving we figured you were headed somewhere safe so we just followed you!” Bless their hearts, they were so scared!

About three years ago, during what is always a very long night at my daughter’s dress rehearsal for dance, the siren’s sounded and we were sent to the basement of the building we were in. I’ve never seen so many teenage girls standing in awkward positions with their arms held high just searching for cell service. I’m not sure if there was an actual touch down that day or not. If I remember correctly the sirens sounded because there was rotation but no actual funnel.

Then just last year we took cover at Brad’s office once again. On Monday, I kept hearing on the news and Facebook about how we were in for some pretty bad weather the next day. I wasn’t too concerned at first but as the weather broadcast interruptions increased and weather man Mike Morgan pretty much dominated the television screen on Tuesday I got worried. When just the potential of a tornado is compared to the recent deadly weather in Joplin, MO and Tuscaloosa, AL it’s a little bit concerning. Ok, a lot bit concerning. I recorded the following news clip on my iPhone to send to Brad.

We rode out the storm in the basement and when we came out we learned that a tornado had touched down just a couple miles from our home. Our former dentist’s home was destroyed. Our dear friends lost their barn and had damage to their home and several other homes and properties sustained damage. On the way to a session a month after the storm I saw some of the damage firsthand. If you’ve never seen tornado damage up close then it’s hard to believe. Huge mature trees completely uprooted is just astonishing. Even more mind boggling is seeing the path that the tornado took. A perfectly tall tree, completely intact while it’s close neighbor is broken in two like a twig. It’s just crazy! 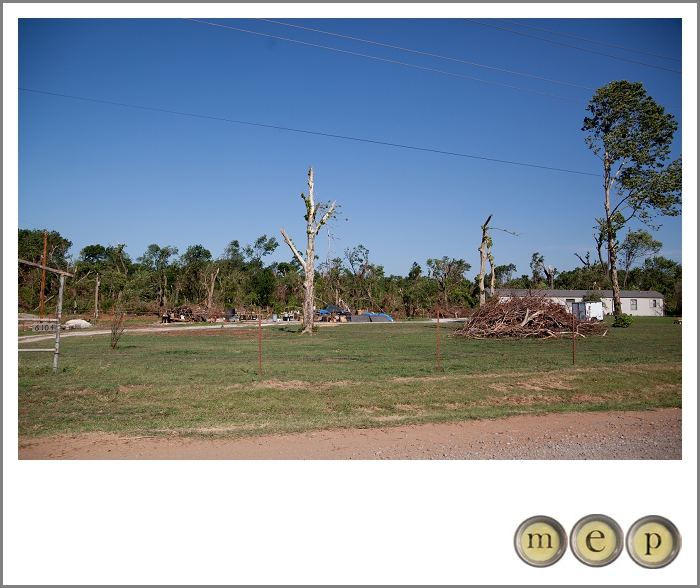 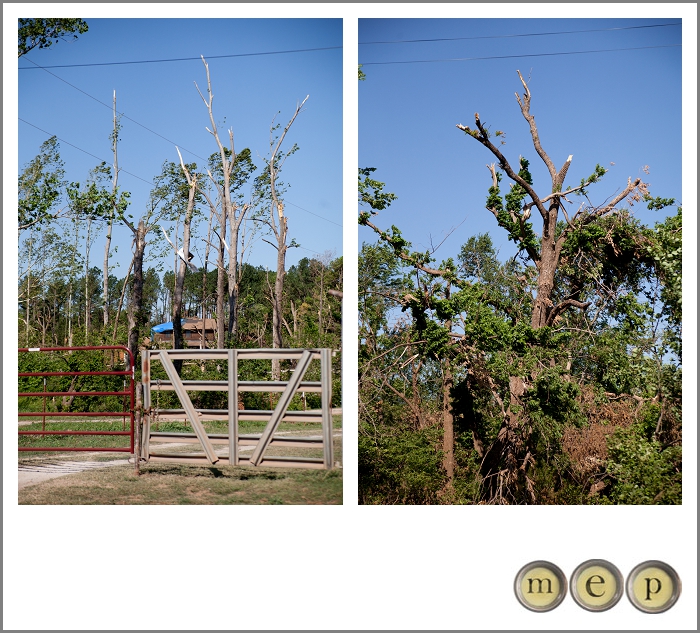 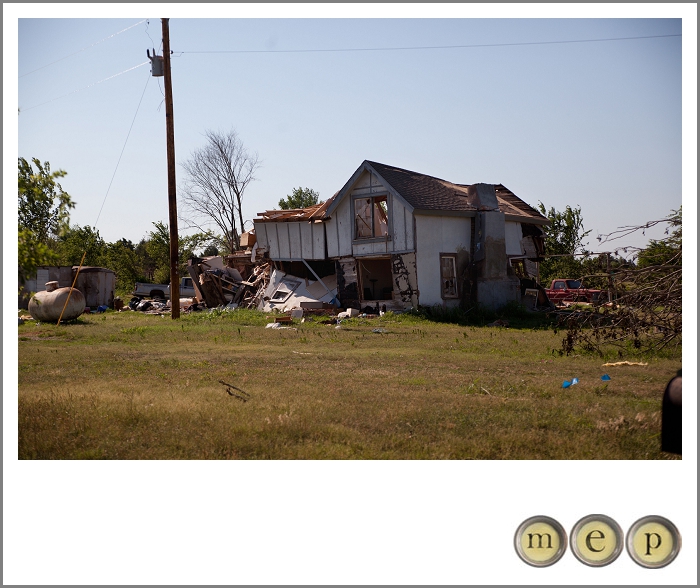 I’m not certain yet but it’s looking like tomorrow evening might be another one of those days when our family once again takes shelter from the deadly storms. I woke up to messages all over Facebook with warnings about the potential for severe storms tomorrow. Like, serious warnings. The technology is there for the meteorologists to track these things and when they talk like they are today…well, I for one listen. This guy says, “Now, the really bad news. The Storm Prediction Center rarely issues “high risk” outlooks (purple) a day in advance. This one maxes out the severe weather probabilities (lower map) — I’ve never seen that before!”

Hans, a former co-worker of my husband also posted a link to the SPC saying, “Saturday will be a dangerous day. If you don’t have a weather radio, get one. If you do, check it’s operation. Watch the news. I’ve been told this is only the second time in history the SPC has issued a high risk on the day 2 outlook (the day before an event) and the first time they’ve done it in the morning. It’s possible (likely even) tomorrow will be a historic day for destructive weather. Keep your eyes open.” Hans has been a storm chaser for as long as I’ve known him. When one of his friends posted about looking forward to “chasing” with him tomorrow someone else commented about it being a “fun” day. Hans replied with, “Not sure it will be a “fun” day. Looks like it will be a historic destructive day. Don’t go chasing unless you are with an experienced chaser. Normally I have a light/fun mood, but Saturday will not be a day to kid around with. People will die. It’s likely we will come across some stuff that may scar you, so be prepared. I’m not chastizing anyone here, just want everyone to be prepared and get the word out.”

So there ya go. I’m “freaked” in the sense of just being anxious about what could happen. It can just be so devastating. Every single time we have weather like this come around my thoughts go to what I will take with me if we have to seek shelter. Obviously the main goal is for my family to be safe. Our “stuff” doesn’t matter at all when you really think about it. However, there are things that can’t be replaced. Mainly, photographs. As a photographer, I know the importance that a simple image can hold. My mom died when I was 19 and I have memories and the hope and promise of heaven but for now? Now I have pictures. And every spring when this weather comes around I think “I have GOT to scan all my photographs!” They are truly irreplaceable. And, um, I have a lot of photographs. I can only carry so many in my arms to our safe spot!

I have a newborn session this afternoon. After that, I think I’ll start scanning! Stay safe out there everyone. This is serious stuff.