It’s Tuesday again and it’s a special one…it a birthday 10 on Tuesday! Today my oldest daughter turns 17. I had her when I was like, 12, that’s why she’s so old. Cause I’m certainly not old enough to have a 17 year old daughter. Right? Right!

Just nod and agree with me.

So today I’m sharing 10 amazing (and possibly random) facts about my sweet Madi.

1. If you’ve had children before then you know that you spend that first pregnancy wondering what the baby will look like. Will she have Daddy’s nose? Mom’s quiet demeanor? Ha! We spent a lot of time really just playing the guessing game as to what our first born child would look like. One thing we were pretty certain of was that she would be pretty bald. Brad and I both had a whole lotta nothing up top when we were babies, and then when the peach fuzz came in we were both blonde as could be. We figured that’s what our kiddos would look like. We were right. Bless her heart, Madi was so bald. I put those little headbands on her when she was little bitty but she figured out how to get them off and wouldn’t wear them. She did get to a point where I could clip a little barrette in a couple long strands of hair she had but if you told her she was pretty she knew immediately that she had some sort of something on her head and would yank it out. Just in case you think I am exaggerating here are some photos of photos taken with my phone.

Bald little Brad at 5 months old having a little snack: 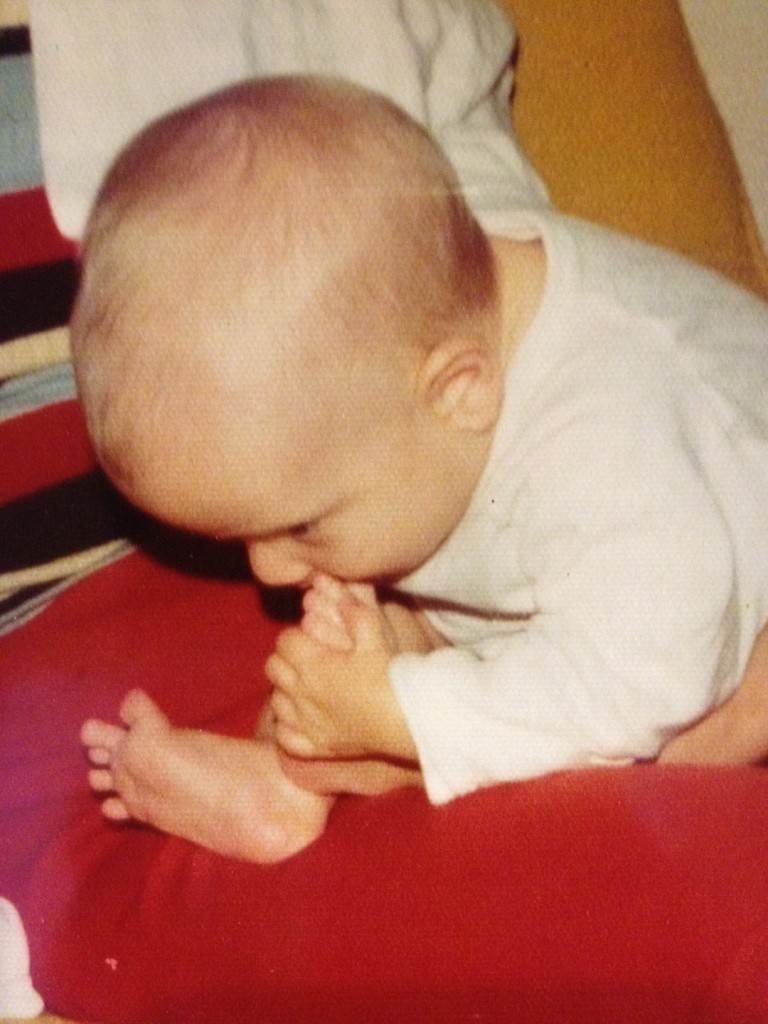 Bald little Margo at 10 months wishing that avocado colored fridge would open up: 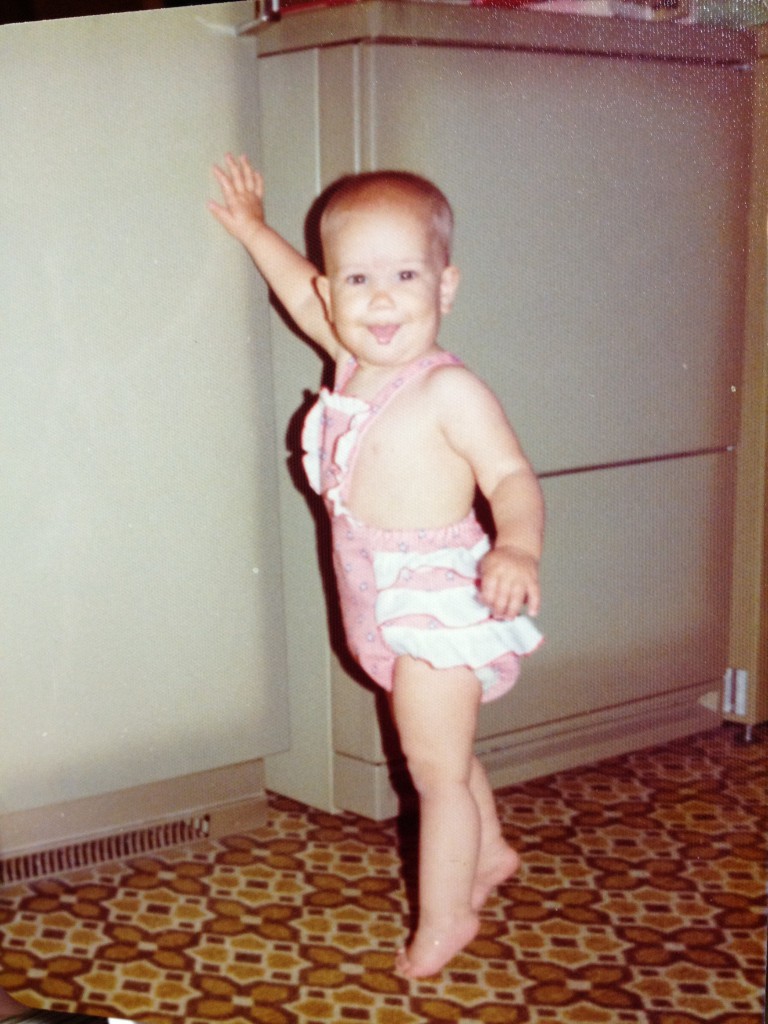 And finally Bald little Madilee at ONE YEAR. See, told ya so! 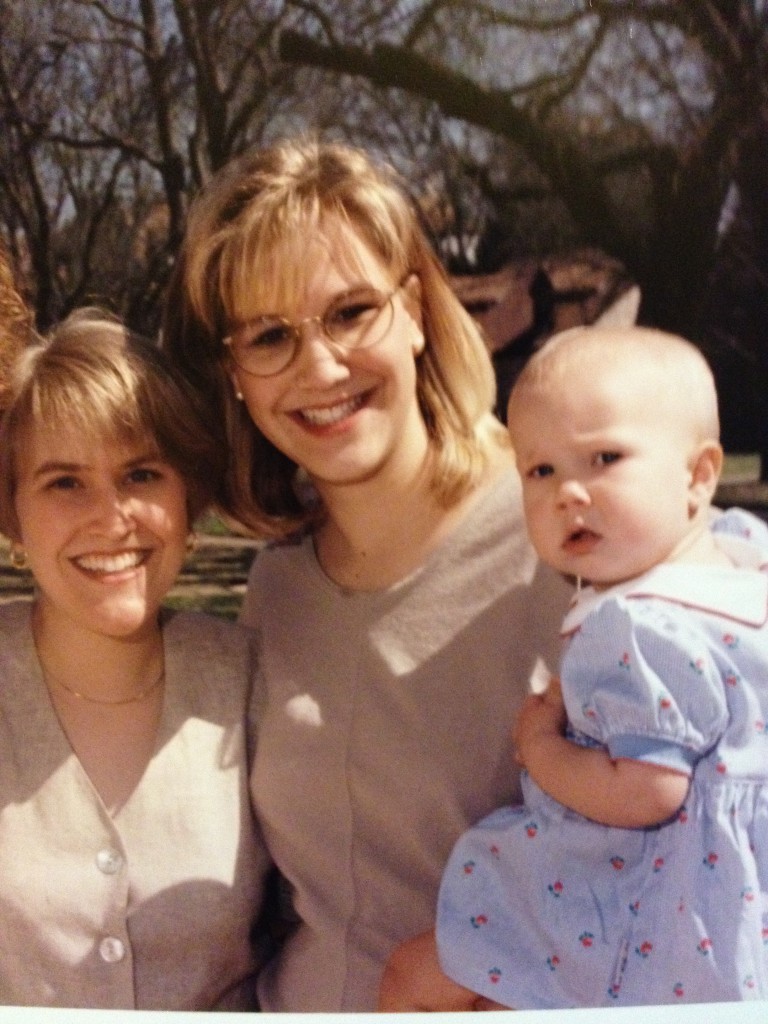 3. When I was a little girl I used to walk around on my toes all the time. See that picture of me? Yep, just like that. Madi did the same exact thing. For probably a couple of years she would constantly be walking on her tippy toes. Everywhere she went. She had the best little calf muscles ever. I was sure she would be a dancer like me. I put her in ballet when she was about 5. Um, dancing wasn’t really her thing.

4. Being the first child has it’s benefits. Although Madi often thinks she has it the hardest. The thing is, when you’re the first, Mom always attends everything. And she always makes sure you have a fun birthday. (Except maybe not once more kids start coming.) But, with the exception of just a couple years, Madi has had some super fun birthday parties. Maybe I’m a bit biased because I was the one throwing them. I posted a whole recap of those birthday’s last year.

5. For someone who didn’t have much hair as a baby, she currently has enough hair for about 3 people. I’m not sure how on earth she got such beautiful thick hair. One year, she grew it out long and when she cut it she donated it to Locks of Love. She’s kinda cool like that.

6. I recently went through and organized all of Madi’s old school papers. I ran across this autobiography from 4th grade. Sometimes I hate that I’m such a pack-rat. Other times I’m so glad that I am. I love seeing what her “hopes and dreams” were as a 10 year old. Some of them have changed, some haven’t.

7. Madi is super duper creative. I always suspected that she had that bug to create things like me but knew for sure when she was in 3rd grade. I was meeting with her teacher for parent teacher conference and was being told how well she was doing in class and how great her grades were. Then her teachers said that she did have one problem. She was messy. Ms. Cox told me that she often had to tell Madi to clean up her area because there would just be a mess all around her desk. The apple doesn’t fall far from the tree.

8. Don’t even think about touching Madi with your feet. She can’t stand them. I have no idea why but she’s always hated feet. Once at WalMart I ran into a friend with their sweet little baby boy in his car seat. I grabbed his little tootsies and was just playing with them when I heard Madi say, “Ewww!” I mean, who doesn’t like baby feet?! Apparently…Madi.

9. No matter how old she is, Madi will never be too big to sit in her Daddy’s lap. And he will never ever make her stop. When we found out Madi was on the way Brad had huge dreams of playing ball with his son and raising a boy. He just knew he was having a son! From the moment he saw her though, he’s been wrapped around her little finger.

10. She’s really just pretty amazing. It’s pretty awesome to watch your child grow up and be on the path that you had always prayed for them. That’s not to say that there haven’t been struggles along the way. I mean, raising kids isn’t always easy and the fear of messing them up…well, it can be scary. I recently saw a text from Brad to Madi. I don’t think he’ll mind me sharing. He told her, “You have big things in your future. I have rarely been as sure of anything in my whole life.” Yep. My thoughts exactly. Go get ’em Madilee!